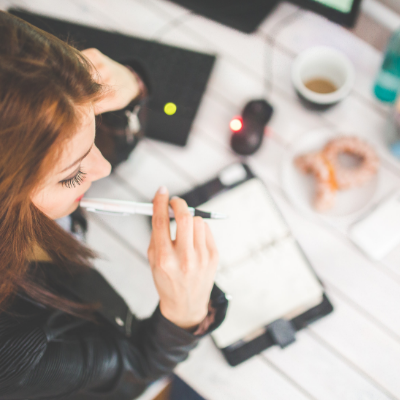 I just had a very emotional conversation with my 12yr old about cleaning her room.  Like ridiculous emotional.  Not just an “I’m not doing it” type of blatant statement but more of a back-of-hand on the forehead “Oh, the pain! It’s just too much to bear” type of thing.

Honestly. I think my eyes were glued toward heaven.

I know she’s a pre-pubescent teenager and that kind of crap is normal, but I also know that she’s almost 13 and like seriously, she should be able to put her shit away.

However, (dammit) the kid makes a good point.  Sometimes looking at the big picture is really overwhelming and scary and getting to the end result can make you panicky and stress.

There is, however, a simpler way.

Being the type of person I am, I look at that room and think “10 mins, tops”.  You get stuck in, pick up stuff off the floor, throw the dirty clothes in the basket, hang up the clean ones, straighten your bed and then it’s 50% done right?  All that’s left is the little things that take no time at all as they all have a place to go.  Laptop plugged in on the desk, books on the shelf, papers filed or recycled and the odd assortment of teenagery stuff put away wherever it lives. Doneski.

Miss N however, looks at that room and thinks  “OMG! this is going to take me all day!!!  I won’t be able to slob about and do teenagery stuff!”. Then, of course, that moves on to panic, then frustration, feeling downtrodden that she’s being forced to clean, anger at me for insisting she clean, emotion coming in waves since she’s a moody teenager and sometimes, even some very creative gesturing that looks like some sort of contemporary dance move.

It’s no wonder I enjoy wine so much.

Keeping your room clean can be overwhelming, as for most kids it’s a big job that seems just altogether too hard.    Its the same for all sorts of things in adult life, losing weight, paying off debt, yadda yadda.

Miss N (quite possibly in order to prove I was being unjust) told me that even though I’m super organised and think it’s easy, that I need to understand that she’s not, and she doesn’t.

However, I have a comeback for this!

Just because your not a tidy person doesn’t mean you can’t be tidy.

Just because you think you can’t do something doesn’t mean you shouldn’t try.  (You might well be shit at it in the beginning but practice makes perfect, right?  Unless of course, my mother was lying..).

Stop focusing on the end result and instead, make the process easier.  By making the process easier, you will do it more often and by sticking with it consistently, your big job will start to get done, and quickly.

For Instance:  You want your kids to keep their rooms clean.

Instead of focusing on the fact you WANT the kids to keep their rooms clean, start thinking of little ways you can help them to change their daily habits which might ensure they CAN keep their rooms clean.    If you implement small changes that don’t require too much effort or thought and you do them over and over, after a while, it just becomes something you always do and it’s not a chore.

I’ll give you an example here.

Every day when I get home from work, I put my bag and keys in exactly the same spot and go get changed into my PJ’s (seriously, I do..).   I chuck my dirty clothes in the basket and pull out my (previously chosen) outfit for the next day (right down to the underwear). I hang it all on my wardrobe door so in the morning I can pick it up in my usual morning blur and head straight to the shower.

This example sounds so boring you are probably thinking….really? that’s it?.  Yes, sister, it’s that simple. Tiny changes are the key.  By doing this I am helping my room stay tidy as I’m:

a) always putting dirty clothes in the basket;

b) not leaving clothes flung about the place ’cause I’ve tried them on in the morning then changed my mind and;

c) I don’t waste 10 minutes every day frantically searching for my sunnies or my keys.

Simple, yet effective. Also, now so much a part of my daily routine that I don’t even notice I’m doing it.

It’s not about having great perseverance, nor endless dedication (who the hell has those things anyway?!)  it’s about routines and habits.  Keeping it simple and ongoing is what will make the biggest changes to the big picture.

Remember:  Just because you are not a tidy person doesn’t mean you can’t be tidy.

Just because you think you can’t do something doesn’t mean you shouldn’t try.

Don’t worry about not being able to do it 100% the first time around.

If you switch your focus from the big picture and start working out how to improve the process, results will happen and probably a LOT faster than you expected.